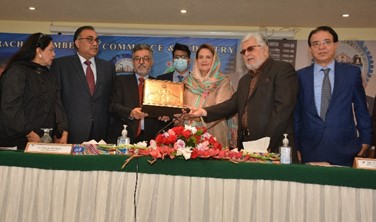 The First Lady Samina Arif Alvi has stressed that early detection is the only prevention for dealing with the life-threatening disease of breast cancer as 98 percent of the women survive when they are diagnosed with breast cancer earlier but unfortunately, majority of the breast cancer patients in Pakistan are diagnosed belatedly when cancer reaches third stage, resulting in a death rate in between 40 to 45 percent.

Speaking at a seminar organized at the Karachi Chamber of Commerce & Industry (KCCI) on Women Empowerment & Breast Cancer on Saturday, Samina Arif Alvi added that keeping in view the limited number of mammogram facilities available in the country, it was better for women to carry out self-examination for five minutes and if they feel anything unusual or any symptom or any change, they must immediately seek medical assistance.

First Lady Samina Alvi, while appreciating KCCI’s efforts to raise awareness about breast cancer, stated that it was very important that the business community of Chamber of Commerce, which plays the role of a backbone in the economy, comes forward to raise awareness about this disease being suffered by many women. “We need to sensitize our brothers, husbands and sons about this serious disease so that women should feel strong and boldly come forward for checkups. We have to ensure that women are empowered and encouraged to come out in every field as women are no less than anyone and they are capable of carrying out all types of tasks if they are strong and healthier.”

She also stressed the need for collective efforts by all segments of society, particularly the business community and media which can play an instrumental role in raising awareness about breast cancer and women empowerment. The awareness campaigns should not remain confined to the month of October only but it should be an ongoing exercise and the media must televise awareness program at least once a month, she added.

Chairman BMG Zubair Motiwala, in his remarks, said, “Today is an important day which would open a new chapter in the history of KCCI as for the very first time, KCCI has staged a seminar on breast cancer which was not given importance in the past.”

Referring to Dr. Zubaida Qazi’s remarks, he said that it was really alarming to see that breast cancer cases have gone up to 23.8 percent which were likely to rise further to 60 percent in few years if not promptly addressed. The government must prioritize this serious issue and an effective strategy has to be devised so that the breast cancer cases could be controlled and gradually brought down instead of upsurging.

He was of the view that the government must make screening and check-ups for breast cancer mandatory for every woman who reaches the age of 40 years which would certainly result in early diagnosis of this life-threatening disease and save many precious lives. “The strategy pursued to get the population vaccinated for COVID-19 pandemic proved very fruitful. Hence, a similar strategy must also be adopted for dealing with breast cancer by taking penal actions, imposing travel restrictions and barring women to avail other essential services on their failure to get the screening done for breast cancer”, he suggested, adding that it was also the responsibility of every male individual to ensure that his wife, sister or daughter have been screened.

While commending the efforts being made by First Lady, Zubair Motiwala extended Karachi Chamber’s full support and cooperation to all the initiatives being taken by the government for women empowerment and rights. “Empowerment comes when women get education and skills, hence it has to be ensured that women have access to education otherwise, the problems being suffered by our women would never minimize”, he added.

Vice Chairman BMG Anjum Nisar, while underscoring the need to change perception and mentally about women, said, “Unfortunately, we live in a society where it is widely believed that women will not be able to carry out several types of jobs which is untrue as women can do wonders if they are fully supported and empowered.”

He was of the opinion that rural women must also be given equal attention in all the awareness campaigns about breast cancer while opportunities must be provided to differently abled women in public and private sector organizations.

General Secretary AQ Khalil, while praising the role being played by the first lady for the betterment of women, said that as women represent more than 50 percent of the population, they must be provided equal opportunities and all their problems must also be treated equally. Moreover, the reserved seats at the National and Provincial Assemblies for women must also be raised according to their population.

President KCCI Muhammad Idrees, while warmly welcoming the First Lady, stated that the empowerment and autonomy of women and the improvement of their political, social, economic and health status was a highly important which would help in achieving sustainable development. “Education is also one of the most important means of empowering women with the knowledge, skills and self-confidence necessary to fully participate in the development process.”

He was of the opinion that entrepreneurship was becoming an increasingly significant source of employment for women across many countries. Nowadays women perform an important role in building the real backbone of a nation’s economy. However, the number of Women entrepreneurs was quite less and they often face gender-based barriers to starting and growing their businesses which needs to be tackled, he said.

“As a nation, I would like everyone to spread the awareness on Breast Cancer so that we could collectively fight for this noble cause”, Muhammad Idrees added while extending full support and cooperation to the government in all its endeavors to create a better society for women.