Advancing its ambition to further innovation and empower the agriculture sector, Telenor Pakistan, in collaboration with Tabadlab and the GSMA, has unveiled a report, ‘AgriTech: Crafting Pakistan’s Journey to Impact’. The report identifies existing challenges to the sector and evaluates the impact that AgriTech will have on accelerating growth.… Continue

Meta, in collaboration with the Pakistan Telecommunication Authority (PTA), has launched an educational series, ‘Chai Chats’ to create awareness among young Pakistani Facebook users on digital literacy and social cohesion through improved digital experiences.  The series features a close-knit group of university friends encountering difficult online situations which they overcome with grace, friendship, and humour to inspire and persuade youth to adopt a positive and responsible online behaviour.… Continue Savyour, Pakistan’s first and largest cashback app, launched its #NotSoSmall initiative on the United Nation’s Micro, Small and Medium Enterprises (MSME) Day to extend additional support to the hundreds of small and medium businesses that are currently partnered with the platform.… Continue There are many things you can consider when purchasing a new smartphone: camera performance, display size, design, and many other aspects. However, the most weight in the decision should be given to the quality of the tech that you are purchasing.… Continue 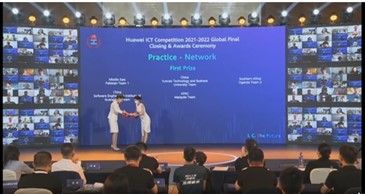 The Huawei ICT Competition 2021-2022 Global Final in Shenzhen drew to a close on June 25. This year marks the sixth Huawei ICT Competition, which included three competitions – Practice, Innovation and Industry – that attracted 150,000 students from more than 2000 universities in 85 countries and regions around the world.… Continue As e-commerce, sees accelerated growth for retail industries (Shopify reported that global commerce sales are expected to reach US$5 trillion in 2022!), companies like Hong Kong-based direct selling company QNET, are ready to reap the rewards.

QNET, an e-commerce direct selling company, is no stranger to the online scene.… Continue

In line with its vision to empower Pakistanis, Telenor Pakistan has partnered with Circle Women to train women in accessing the internet and other essential digital tools. The initiative will equip home-based and young females with disadvantaged backgrounds with digital literacy, entrepreneurship skills, and financial inclusion.… Continue There is no guessing game, no scouring the web for the latest rumours, no hoping for this and that feature. The cats’ out the bag and you have all the facts you need to make an informed decision. Amongst all the cool smartphones of the year, one out there makes for an incredibly compelling option.… Continue Companies worldwide are adapting to a rapidly evolving reality of work that employs technological products and services for an ever-improving customer experience. To stay ahead of the curve and meet the changing needs of businesses around the country, Telenor Pakistan launched Telenor Business Solutions last year.… Continue Pakistan’s No.1 Voice and Data Network, Ufone 4G has introduced the industry’s biggest and most affordable hybrid bundle, ‘Sab Se Bari Offer’ to provide its customers with the best user experience possible. Ufone 4G’s hybrid bundle offers greater usability, control, and enablement to its users so that they stay connected for longer through the company’s superior voice and data while they engage in activities related to work, education, or leisure.… Continue Audi in collaboration with SIEMENS today unveiled Pakistan’s first and only Ultra-Rapid DC Charging Station equipped with Siemens SICHARGE D series chargers with power up to 160kW in Karachi.”I am particularly pleased to be present today at the inauguration of this example of brand new German innovation.… Continue

Infinix, the leading smartphone brand of Pakistan has announced the online sales of its new premium phone NOTE 12 VIP which starts today. It will be available on Daraz and Xpark from 13th June to 19th June 2022 on special discount of up to Rs.2500.… Continue HMD Global, the home of Nokia phones, has achieved the milestone of producing over one million locally assembled mobile phones in Pakistan in just 6 months after setting up the assembly unit in the country.

The company has partnered with Techno Pak Electronics (Private) Limited last year in setting up the assembly plant of Nokia phones in Pakistan which has invested an amount of $2 million in its factory & related channels in 2021 which generated over 500 skilled jobs so far.… Continue Ufone 4G – Pakistan’s no. 1 voice and data network as per Pakistan Telecommunication Authority (PTA)’s Quality Index 2022 – has introduced ‘UPower 250’ to enhance the scope of its unique offering, UPower.  The offer is all about empowering customers to exercise their will by choosing their voice and data packages from a wide range of options of various denominations.… Continue The leading smartphone brand, TECNO is all set to unveil its most anticipated phone globally – the Camon 19 series. The launch is to take place above the hustle and bustle of the streets of New York City atop the iconic Rockefeller Center on June 14, 2022.… Continue Huawei announced a batch of key inventions as part of its biennial “Top Ten Inventions” Awards at the “Broadening the Innovation Landscape 2022” forum held at its Shenzhen headquarters. The award is designed to recognize inventions that could create new series of products, become important commercial features of existing products, or that generate considerable value for the company and the industry.… Continue Reiterating their commitment to accelerate digital inclusion in the country, Jazz and UNDP Pakistan organized a ‘Girls in ICT’ event highlighting the importance of digital skills for women and promoting Digital Gender Inclusion through enhanced access to ICTs (Information and Communications Technology).… Continue

Pakistan Car sales are expected to remain flattish MoM to ~21k units in May-2022 as sales are reverting to their normalized level. To note, car companies’ sales increased in March-22 to 26k units, owing to improvements in supply chain disruptions, following which sales fell for the second month in a row.… Continue

You can finally now lay your hands on the Trendy Flagship & Camera King, the HUAWEI nova 9. Huawei’s latest smartphone comes with an array of splendid features including a stunning design highlighted by an all-new colourway – Colour No.… Continue Huawei was named Champion at the World Summit on the Information Society (WSIS) 2022 Forum’s Prizes Ceremony in Geneva yesterday. The WSIS 2022 Prizes Campion, was presented to Huawei for its use of their intelligent net-zero carbon campus solution at the Yancheng Low-carbon & Smart Energy Industrial Park project.… Continue