According to the State Bank of Pakistan (SBP), the total liquid foreign reserves held by the country was decreased and stood at US$ 20,058.6 million on 12-February-2021.

The break-up of the foreign reserves position is as under: –

Foreign reserves held by the State Bank of Pakistan: US$ 12,889.7 million 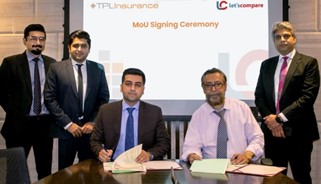 TPL Insurance, Pakistan’s first direct insurance Company, has entered into a strategic partnership with Let’s Compare. An MoU was signed between the two companies at the TPL Insurance Head Office in Karachi.

The partnership aims to digitize the end-to-end experience of purchasing insurance.… Continue Meezan Bank, Pakistan’s first and largest Islamic bank, has partnered with Sehat Kahani – an e-health services provider offering healthcare through telemedicine solutions to extend medical benefits to its employees and their families. In this regard, a Memorandum of Understanding was signed between the two parties at Meezan House, Karachi, attended by Mr.… Continue EFU General has been conferred with the 14th Consumers Choice Award 2019 in the category of Best General Insurance Company of Pakistan. Mr. Altaf QamruddinGokal, Chief Financial Officer received this award. Foreign reserves held by the State Bank of Pakistan : US$ 7,741.6 million

Foreign reserves held by the State Bank of Pakistan: US$ 7,862.4 million

During the week ending 31May2019, SBP’s reserves decreased by US$148 million to US$7,862.4 million, due to payments on account of external debt servicing.… Continue In a joint ceremony held in Dubai, Bank Alfalah Ltd signed an agreement to transfer its Afghanistan Operations to Azizi Bank, a leading financial institution in Afghanistan. Bank Alfalah’s Afghanistan operations had total assets of Afghani 15.3 billion as of 31st March, 2018.… Continue Meeting of the Board of Directors (BoD) of National Bank of Pakistan (Bank) was held on April 27, 2018 at the Bank’s Head Office in Karachi in which the BoD approved the financial statements of the Bank for three months period ended March 31, 2018.… Continue

Experts from Standard Chartered’s Greater China Region hosted road shows in Sri Lanka, Bangladesh and Pakistan to outline the benefits of and investment opportunities from China’s B&R initiative, together with Renminbi internationalisation. The purpose of these roadshows is to enable our clients to take advantage of the benefits presented by China-led Belt & Road initiative (B&R), which is also bringing more cooperation opportunities for Pakistan and China.The… Continue

he Board of Directors of MCB Bank Limited met under the Chairmanship of Mian Mohammad Mansha, on April 25, 2018 to review the performance of the Bank and approve the financial statements for the three months period ended March 31, 2018.… Continue

MCB Bank Ltd, one of Pakistan’s largest private sector banks, has entered into an agreement with one of the country’s largest logistics services providers TCS Pvt. Ltd. for mutually beneficial services. With the collaboration, MCB customers will gain access to affordable holiday packages to premium destinations worldwide through TCS Intiana Travel and Tours services.… Continue

The SBP and FBR today formally launched online tax collection system. This will allow the tax payers to pay FBR taxes and duties using internet banking accounts or ATMs without the hassle of visiting the banks’ branches. The system was launched by Mr.… Continue

According to State bank of Pakistan, today, the PKR-US$ exchange rate in the interbank market closed at PKR 115 per US$ and witnessed an intraday high and low of PKR 116.25 per US$ and PKR 110.60 per US$, respectively.

Exports and workers’ remittances have posted promising growth rates of 12.2 percent and 3.4 percent respectively during July-February FY18 after showing a decline in the same period last year.… Continue