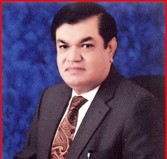 Chairman of National Business Group Pakistan, President Pakistan Businessmen and Intellectuals Forum, and All Karachi Industrial Alliance, and former provincial minister Mian Zahid Hussain on Wednesday said the Central bank planning to raise interest rates as their experts consider a hike necessary to stabilise the economy while the business community does not want interest rates hike at this juncture.

State Bank of Pakistan is planning a significant increase in interest rates as it believes that this step is the last option is to reduce inflation, stem the falling value of the rupee, curb the growing current account deficit and reduce the balance of payments imbalance.

Mian Zahid Hussain said that all the previous records of inflation in the country have been broken. The rupee has lost true value against the dollar and the current account deficit is reaching the level of three and a half billion dollars while the government has failed to overcome these two problems which has prompted SBP to take action.

Talking to the business community, the veteran business leader said that SBP is considering a hike in the interest rate to 100 to 200 basis points as inflation is increasing which has made life miserable for the people.

Experts believe that in the next few months, inflation will rise further which will increase public unrest and create political turmoil which is not in the interest of the country, he added.

In view of this situation, the SBP’s Monetary Policy Committee has convened its meeting a week ahead of schedule in which important decisions will be taken to end uncertainty in the market.

Mian Zahid Hussain said that the demand for dollars in the local market is increasing, oil prices are higher than required while grain and sugar have to be imported which is making the deficit uncontrollable.

The current account deficit during the three months of July, August and September of the last year was eight hundred and fifty million dollars which has increased to three billion dollars this year while the value of dollar has jumped to Rs174.

The government got some relief from the remittances of ten and a half billion dollars during these three months, but it is not enough to solve the problems.

He said that from the business community’s point of view, raising interest rates will severely shake investor confidence and increase business costs, reduce employment and add to the public’s woes.

Instead of raising interest rates, the government should increase the production process, including agriculture, by ensuring uninterrupted supply of electricity and gas at reasonable prices to boost the economy.