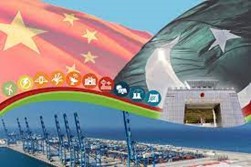 · Timeline for the execution of CPEC phases spans between 2015 to 2030 with many projects providing benefits over a much longer period.

· To recall, Pakistan faced it worst energy crisis in 2013 with several hours of load-shedding every single day. Moreover, the country’s power mix was inefficient as a major quantum of electricity was being produced from the more expensive fuels.

· It was during this time that China was contacted to help Pakistan exploit its indigenous coal reserves. As the same time, China was looking to achieve its age old dream of a silk route for trade and transportation.

· Hence came into fruition the China Pakistan Economic Corridor (CPEC) which was a project targeting bilateral and regional connectivity under China’s One Belt One Road project.

· The Early Harvest phase of 2015 to 2020 focused on alleviating Pakistan’s energy problems and removing major bottlenecks for industrialization. At the same, several industries of China moved to the Western province, which the country wants to develop under its regional connectivity target.

· The medium term phase till 2025 is currently ongoing with focus on expansion via industrialization and pick up in manufacturing.

· Whereas the last and final (long term) phase till 2030 will primarily involve developing mechanisms for sustainable growth.

· Energy goals achieved thus far include power plants worth 5,300MW which are up and running, 880KM Matiari-Lahore transmission line (Thar to Lahore connectivity with losses of under 4%), 3,500MW to be implemented within the next 6 to 8 months, additional 4,000MW under the planning stage, and finally, focus on renewable energy.

· On the Transportation front, 1,800KM long Karakoram Highway and 820KM optic fiber line has been laid, an International Gwadar airport is being developed (26% completion achieved) and ML-1 railway line will be laid. Apart from this, USD 3.8bn will be spent on Karachi Comprehensive Coastal Development Zone.

· Pertinently, USD 25bn have already been invested under the umbrella of CPEC while another USD 28bn is expected under upcoming infrastructure projects.

· Moreover, briefing was given on industrial cooperation between the two countries. For this 9 special economic zones (SEZs) are being developed alongside a free zone in Gwadar. Current focus is on 4 SEZs, one for each province (Allama Iqbal Zone in Punjab, Rashakai in KPK, Dhabeji in Sindh and Boston in Baluchistan) and the free zone in Gwadar.

· Within these SEZs, there is a strong presence of local and international investors. Although the general consensus is that these have been formed for China, contrary to this belief, other countries such as Germany and Netherlands too have invested here.

· Vision of the ongoing phase relates to proper implementation of the SEZs and “export orientation plus import substitution” in order to make Pakistan a “manufacturing hub.”

· In terms of numbers, the new silk route will grant China a net saving of 21 to 24 days on average which will help the country serve international clients better and save time and money both.

· Moreover, other land locked countries in the region (such as Tajikistan) will also benefit from the improved road network under CPEC.

· Pakistan remains an ideal partner for China to implement this project. First off, competitive regional labour costs whereby Pakistan’s labour costs are 2x cheaper than China’s. While massive shift from rural to urban areas has also made certain skilled labour scarce in China.

· Moreover, labour in China is getting old due to their recently concluded one child policy. Whereas Pakistan’s young demographics are impressive; over 60% of the population is under the age of 40.

· In particular, focus will be on Pakistan’s export market whereby its textile sector is set to reap foremost benefits. At present Pakistan’s textile exports have an under 2% share globally and planning is being undertaken to increase this by improving value added products.

· Additionally, prospects of the China Pakistan Free Trade Agreement – II were discussed. This was finalized in Jan’20 with a total of 313 items selected for exports. To recall, 3,394 tariff lines were already zero rated under phase I whereas another 2,471 tariff lines will become zero rated in the next 3 to 8 years.

· Moreover, a key component of CPEC is the development of Gwadar City, Port and free zone. 10 companies are already operating in the free zone despite limited water and electricity. Second phase of this project was inaugurated by PM Khan in Jul’21. This zone offers a tax holiday for a period of 23 years.

· Apart from this, fiscal incentives offered by Pakistan are far better than those offered by other countries. The only problem remains execution.

· Of the investments flowing in, three new working groups have been identified: 1. Science and technology, 2. Agriculture, and 3. Information technology. Pertinently, last two are getting the most attention.

· Two updates can significantly aid dynamics of the country. An area near Gwadar has been selected for cotton cultivation as its soil is ideal for the same. Pakistan is currently importing 50% of the yarn it uses for textile exports and this may be replaced. Secondly, China has expressed interest to hire nearly 150,000 people with IT skills in the next year and a half as many companies are planning to locate to the technology zone being established in Islamabad.

· A major concern of the Chinese was security, which has been overcome by the Army and Navy. A special security cell is being created for Gwadar alone.

· Finally, an enabling environment for investment has been created. From 37 approvals previously required, a one window operation will aid flows in the country. A compliance regime is being implemented whereby investors are mandated to follow the rule of the land and if they fail to do so, a penalty will be imposed. This will cut short the approval time and delivers a sense of urgency which was much needed.